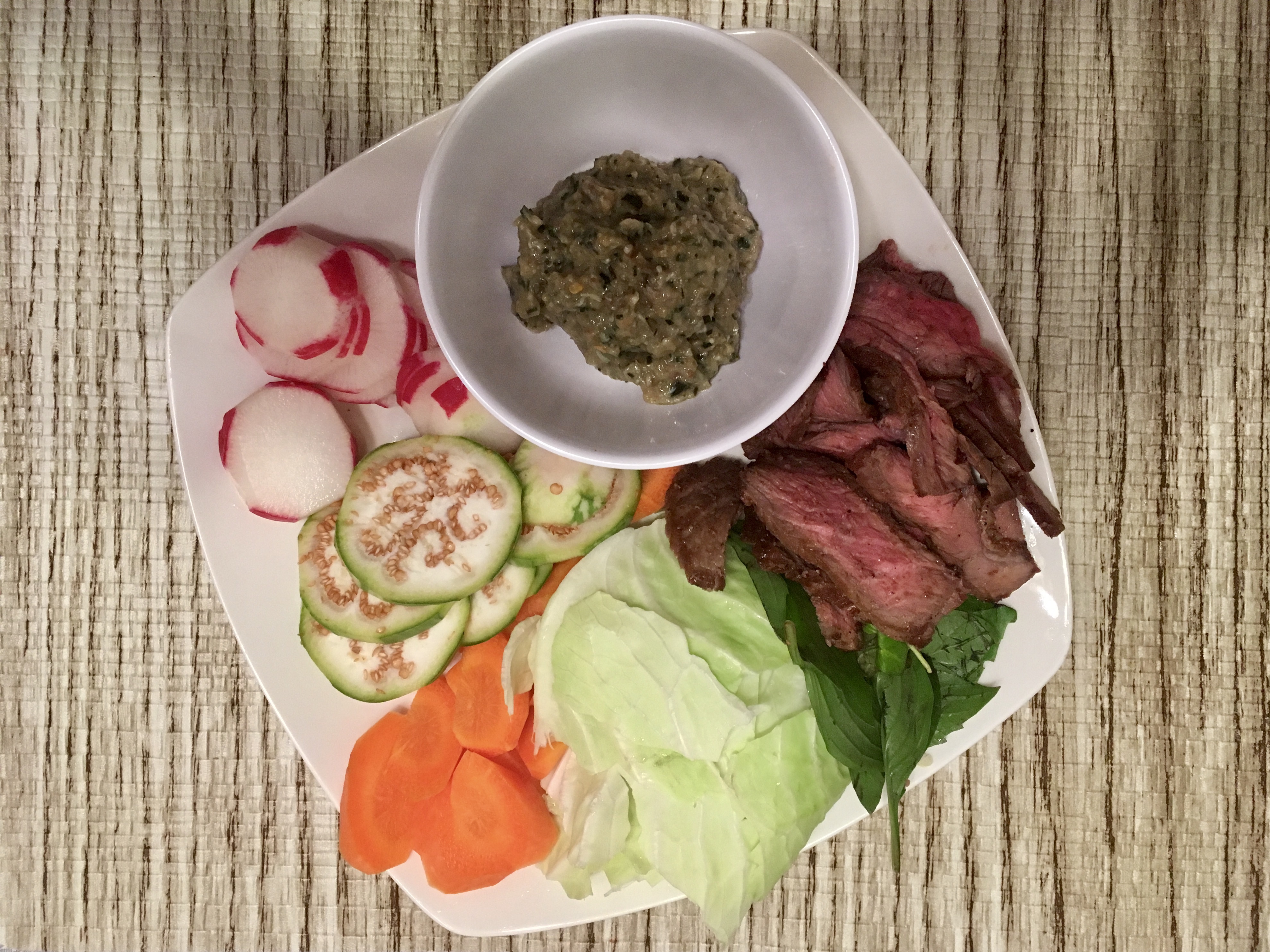 Many foods that are considered ‘delicacies’ in their place of origin are ‘an acquired taste,’ as the saying goes, elsewhere. In the cuisine of Southeast Asia, there are many such foods, but in Cambodian food, the star is prahok. Prahok is paste made from crushing, salting, and fermenting certain types of fatty river fish that are native to the area. As with most fermented foods, prahok most likely originated as a means of preservation, but has long been a central component in Cambodian cooking. Many people are familiar with the fish sauce that is used in the Vietnamese or Thai cooking. Prahok is the fermented fish itself from which the fish sauce is made.

Sachko prahok chaw (grilled beef with fermented fish paste) is a dish somewhat unique to the Siem Reap province of Cambodia, my wife’s hometown. The way that my wife and her family prepare this dish is to grill a lean cut of beef and slice it thinly. The beef is served with various raw vegetables and herbs. The beef, vegetables, and herbs are then dipped into the prahok and eaten. In this preparation, the prahok itself is served raw (it is also used as a flavoring agent in hot dishes) and is prepared to the diner’s taste with chopped up garlic, shallots, chili, herbs, and lime juice all incorporated into the paste. This allows the diner to taste as much or as little of the actual prahok as he or she prefers because it is a strong, funky flavor.

I wrote about my first exposure to sachko prahok chaw in the post Tiger Stripes and Ant Eggs. The first time I had it, I had only just begun eating Cambodian food. I had tried and liked many Thai, Vietnamese, and Laos dishes (some I did not care for, even if simply because of some of the textures), but this was the deep end of Cambodian cuisine and I was not ready for it. Since then, I have grown to enjoy prahok as a flavor in Cambodian cooking and I even enjoy sachko prahok chaw, but one of the main reasons this is the case is because I have people preparing it for me who know and respect my palate. For example, in sachko prahok chaw, I like a lot of garlic, shallots, chili, and lime.